Connie and I were privileged to have Retired Lt. General Tex Brown and his wife Ann accompany us and minister with us for a five day conference in Armenia (bordered by Turkey, Georgia, Iran and Azerbaijan) that involved just over 100 pastors and spouses. 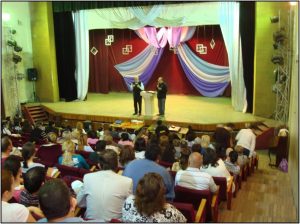 It was a wonderful time which is hard to put into words. That is why I like to share with you what attendees had to say. Ruth Kupeian was involved in the organization of the conference. Here is what she had to say: “I am thankful to God for your ministry. It is valuable beyond measure. I cannot say enough about it. One important reason is the lack of role models of leadership in ministry and in family relationships. Your teaching is important and right on target, but what touches the hearts are the real life stories, transparent testimonies and painful subjects and the love you showed one another as couples. This is very refreshing to see in Armenia. Culturally men and women do not express their love for one another before others. I am not sure how much they express privately. It is considered unmanly to do so. I believe you gave these couples much food for thought. You also gave them real life examples to follow if they have open hearts.”

”When you talk about marriage and the man being the head and in authority, they know all of this and hear it often. What is new for them is to hear about the woman being equal and her need to be loved and nurtured, and the important role she has to play in God’s kingdom and in the family. These are not often emphasized in teaching in many churches. I believe there was enough balance between these two which made it acceptable to the men and it was refreshing for the women.”

“You (Shepherds Support Team) are one of the best examples of who He is and how He is. It touched my heart how many times you emphasized that you made mistakes and you were not perfect.” 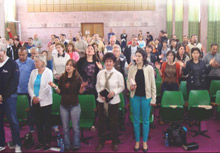 “Your messages will live long in our hearts. We get many visitors here in Armenia but often it has been very discouraging and disappointing to know them. I am sad to say this because often you do not see Christ in them even if they come to preach about Him. But you have lived Him out among us and we will never forget you and will look forward to seeing you again.”

I will quickly mention a few other comments: “Everything was wonderful. For 5 continual days we felt like we were in heaven and enjoyed God’s blessings. Words
are not necessary.”

“All was wonderful. We received plentiful blessings from the banqueting table of God’s Word served to us by God’s wonderful people. The romantic evening was amazing.”

“The conference has been so meaningful for me that I do not have enough words to describe it. There has been nothing like it. Praise be to God.”

“The conference has left a deep impression on me. Our relationship was good but this conference has helped us appreciate more the deeper responsibility of ministry and the mystery of the marriage covenant. We would have lost out on great blessings if we had not come. We have decided to apply these teachings and be blessed by them.”

“We began to appreciate one another more and to give more time to one another.”

“We received a new momentum in committing ourselves to Christ and to one another.”

“This was the first time I am taking part in a couples’ conference and I enjoyed every aspect of it. I pray that there will be more opportunities such as this. I am thankful to God for His blessing upon us. Praise be to God.” 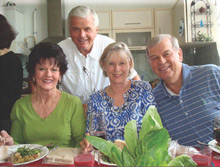 Since Tex and Ann went with us for the first time we thought that you would like to hear from them: “Since its inception we have been so impressed with Shepherd’s Support. But now that we have been on a trip with Connie and Steve we cannot even begin to explain the effectiveness of this ministry. To see and experience the joy that these pastors and their wives had during the week of edifying them was so gratifying. They hungered for the Bible teaching, appreciated the ideas for future sermons, and took lessons about marriage to heart. Added benefits were the friendships that they made with each other – something that will outlast any teaching that we gave them, but that they would never have been able to make otherwise. For many it was the only time they had ever had an opportunity to concentrate on their marriage, for the wives to not have to cook a meal, to be taught rather than doing the teaching, to have some time just for fun, and for the love of Christ to be shown to them with nothing expected in return.”

Ann added her personal thoughts: “For me personally, I was way out of my “comfort zone” in just about every way: Jet lag, foreign language, uncomfortable beds, scratchy sheets, strange food, being sick, and speaking to the group were all difficult for me. BUT, I would not take any amount of money for the experience. It was so gratifying to hear from them how much the week meant to them, how much they learned, and how they felt their marriages would be better. I felt that I was right where Jesus wanted me to be for that week.”

Again let me add how grateful we are for your prayer and financial support. So many negative things can happen when traveling these days with airlines, luggage, sickness, visas, safety on the highways, etc that without the prayer support we could not do it. God always goes before us and with us and we know that we can step out in faith and He will be there. I think that you can also see the importance of being there with the people to hopefully give them some positive examples in marriage.

Now for a few random thoughts: First, Tex and I also spoke at an exciting young church of about 500 people (mainly young) on Sunday morning. It was a long and lively service. Second, people were very impressed to be able to get to know a 3 star general and his wife, because in their culture they are so far above the common people that they would never have such an opportunity. We praise God for the humility of Tex and Ann. Finally, I give the pastors lots of notes so that they have 6-12 months’ worth of message outlines to teach in their churches, which Ann
made reference to above.

Our next big trip is in the end of July when a team of 13 of us will be going to Malawi to minister to hundreds of pastors and wives coming from Malawi and Mozambique, and 250 orphans. We will update you as the time draws closer. “To God be the Glory. Great things He has done.”