Shepherds’ Support International had its beginning in Pastor Steve Troxel’s heart in the Spring of 2004 while he was preaching at a large conference of 5,000 Rwang and Lisu Christians. They were gathered to celebrate 25 years of the barefoot doctors’ ministry in northern Burma. Following the last session, an older man spoke up while they were warming themselves around a campfire and said “I am 80 years old. I walked 21 days to get here and I don’t want to see this conference end.” Steve’s heart was pierced and his mind was haunted by the pastor’s words. Pastors and spouses worldwide are amazing servants of God and yet often lack the equipping and encouragement to press on and finish well. The great commission of Jesus to go and make disciples amongst all peoples continued to stir Pastor Steve’s heart and fueled his commitment to strengthen the ministry of those serving in less-resourced places around the world and Shepherds’ Support began. 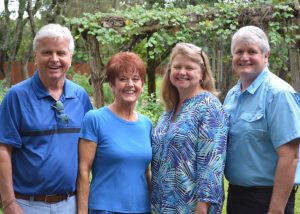 In 2016, it became clear that the Lord had been preparing Shepherds’ Support International for a transition to lead us into the future. Effective at the start of 2017, the executive board, along with Steve and Connie firmly believed that it was time to pass the baton of leadership to Rick and Diana Lowe who have walked alongside us over these ten years. Rick previously supported us through his role as the Pastor of Missions and Outreach at Wayside Chapel and Diana as our very capable and efficient administrative assistant.  Rick joined us full-time this past September.

Rick and Diana served as church planting missionaries with the Evangelical Free Church in Mexico for 14 years.  Later, Rick served as a Pastor at their home church in the Chicago area for three years and more recently at Wayside Chapel in San Antonio for 10 years.

Ministering with Rick and Diana side by side has given us the opportunity to see how God has uniquely prepared and equipped both of them over the years for such a time as this. Together they bring a depth of cross-cultural experience, pastoral knowledge and servant leadership that reflects our core values in encouraging and equipping ministry leaders and their spouses.